Injustice: Gods Among Us

DC superheroes in their most spectacular battle 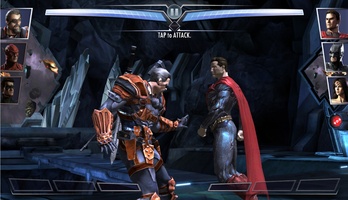 Advertisement
Injustice: Gods Among Us is a two-dimensional fighting game where you can play as many different characters from the DC Comics universe, including Superman, Batman, Aquaman, Lex Luthor, Joker, Green Lantern, and Nightwing, in a fight against other superheroes and supervillains.

Gameplay is pretty similar to the game's big brother version (available for Playstation 3, Xbox 360, and PC), although naturally the traditional controls have been replaced by a system that is more intuitive for touch screen use: just swipe your fingers across the screen to hit your enemies.

As you participate in combats, your characters will gain experience, and little by little you can add new faces to your starting roster. Unlocking them adds a whole other character and card collecting element to the game.

Injustice: Gods Among Us has outstanding graphics, with character models worthy of a console game. The game is especially impressive when played on a high-powered Android tablet.

Injustice: Gods Among Us is one of the best options you have when looking for a fighting game for Android, not only for the charisma of its featured characters and its superb graphics, but also for fun gameplay that's sure to keep you hooked for hours.
Reviewed by Andrés López

Very nice in smack down of their powers... Cool

What requirements must my phone have so that the game does not come out in black and white?

what about the graphics? why is everything white? at 3 sp everything is black what kind of garbage! ??

Marvel Puzzle Quest
The superheroes have taken over the ledgendary Puzzle Quest
Krrish 3: The Game
The official game of the Indian blockbuster
Batman: Arkham Origins
Join Batman in his fight against crime
Spider-Man Unlimited
With great power comes great responsibility
MARVEL Future Fight
The best superheroes in the universe united in one game
Super Hero Fighter
Fights between the most powerful superheroes
MARVEL Avengers Academy
Go back to school with the Avengers
Super City (Superhero Sim)
A proper action-filled superhero simulator

Similar to Injustice: Gods Among Us